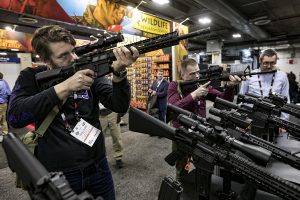 Now is the time for Congress to step up and pass common-sense gun violence prevention reforms, such as universal background checks, closing the gun show loophole, and banning assault weapons.  The House of Representatives has already passed HR 8, the Bipartisan Background Checks Act, which is the first step in transforming gun safety laws in our country. This legislation now sits before the Senate.  Tell your senators they must act now and pass the Bipartisan Background Checks Act and save Americans from the terror of gun violence.  Click Here

The League position on Gun Safety

Curbing gun violence is a critical matter of public safety and health to restore public confidence in our government’s ability to protect communities and vulnerable populations such as children, the elderly, and people of color who are often targets of gun violence. In the wake of the continued national tragedies of repeated and preventable mass shootings and gun deaths, the League is urging Congress to act on comprehensive gun legislation. LWVUS submitted recommendations on common-sense steps to reduce gun violence to the members of the Senate and House Judiciary Committees. Comprehensive gun safety reform is desperately needed and Congress must act to save countless American lives.

As comprehensive gun safety reform is considered and implemented, it must include:

The League of Women Voters of Florida seeks to reduce and prevent gun crimes, injuries, and deaths via: